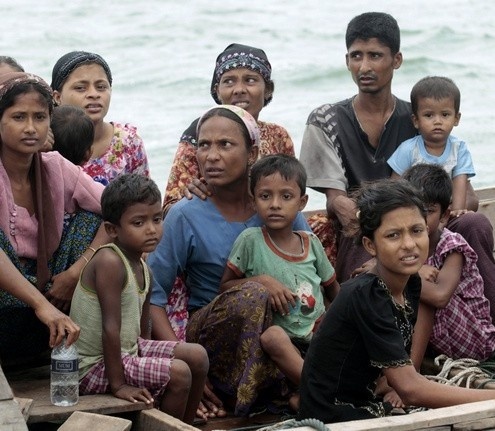 September 5, 2017, ISLAMABAD: Vice-President PPPP, Senator Sherry Rehman condemned the current violence in Myanmar where thousands of Rohingya people have been killed and around 120,000 have been displaced.

Regretting the scale of the recent atrocities, Rehman said, “Such barbarism is unacceptable and has no place in the 21st century international order. The international community, headed by the UN, must come together to bring a stop to this brutality”.

“The numbers and the response are alarming. The silence of the powerful forces over the Rohingya genocide despite the persecution of thousands is shameful. People are faced with death whether they stay or leave.

The Senator also expressed her dismay over the silence of Myanmar’s leader and Nobel Peace Prize winner Aung San Suu Kyi, “The world rallied behind Aung San Suu Kyi throughout her pro-democracy activism struggle. How can any leader who fought for democracy and human rights stay quiet when minorities are beheaded and burnt in your country under your leadership?” asks Rehman.

Rehman went on to criticize the slow response of the international community, saying, “The numbers and the response are alarming. The silence of the powerful forces over the Rohingya genocide despite the persecution of thousands is shameful. People are faced with death whether they stay or leave. Stay and you risk being burnt alive or beheaded, leave in overloaded refugee boats and you risk drowning. It is the international community’s responsibility to give them them the right to a secure life at the very least”.

According to reports, 250,000 Rohingya Muslims have no access to food, as all aid supplies have been suspended and around 20,000 impoverished Rohingyas are still stranded in no man’s land between Bangladesh and Myanmar with numbers predicted to escalate in the coming days.

Speaking out against those who have accused Pakistan of not hosting refugees, Rehman argued that “Pakistan is one of the biggest hosts of Rohingya Muslims in the world where more than 350,000 Rohingyas reside in Pakistan and have been warmly accommodated”.

Currently, Pakistan hosts more than 1.6 million refugees from around the world.

“World leaders must unite and immediately intervene to stop the genocide of the Rohingya community. It is high time Aun San Suu Kyi condemns and acts against this escalating crisis. Myanmar is home for Rohingyas, they need to be afforded the same rights and protection as any other citizen of Myanmar,” the Senator concluded.